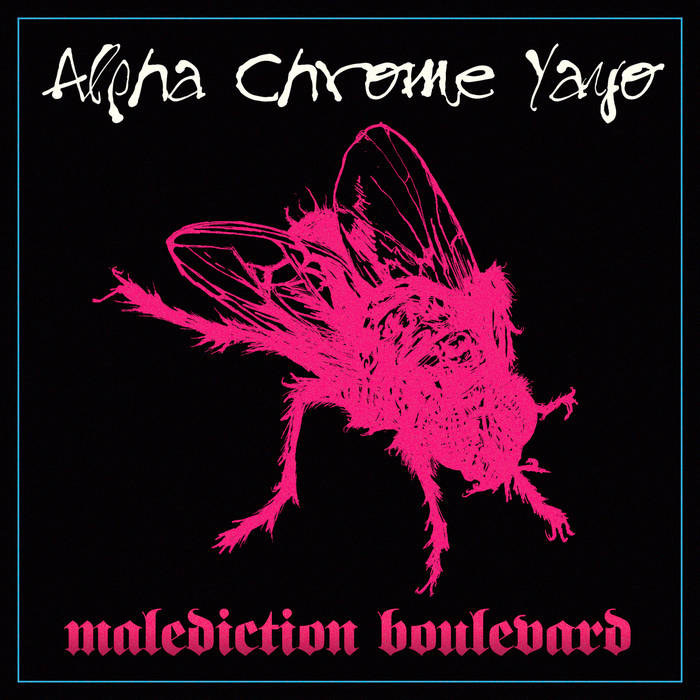 palehorse666 filled to bursting with horror and bugs, but also extremely addictive synth and guitar work. instances of industrial synth and gothic rock, with a terrible feeling of dread permeating it that I adore. so much to love in such a small package. very solid, sinister release. Favorite track: Malediction Boulevard.

"I'm an insect who dreamt he was a man, and loved it. But now the dream is over... and the insect is awake."

Preternatural dread. Older-than-time horrors. Cursed inner-city tenements and creatures of the night. Malady and mayhem. Pestilence and perdition. Retribution and revenge. All at home on Malediction Boulevard.

Pre-order now to get it half price, and receive an immediate download of the title track, as well as the utterly wild 'Elysium Mix' before it's available anywhere else.

"The future of synthwave is here, and it sounds an awful lot like Alpha Chrome Yayo." - James Mitchell, Echosynthetic/Nightride FM bit.ly/2J6iJbp


"So strange and unique, I actually remain stunned by how well it works...

A ‘malediction’ is a magical word or phrase intended to curse or cause harm. ACY ’s references, quotes and titles (his *words*) deliberately prime you for, and enhance, each song's deeper and darker facets.

It’s an incredibly shrewd artistic approach, and combined with how damn entertaining this EP is; it reflects what a vital and exciting artist Alpha Chrome Yayo is." - Ryan Cole, Pastel Wasteland bit.ly/2viltKI


"His most assured and comprehensively impressive effort to date... a four-track blitz of cinematic synthwave, face-searing solos and first-rate production." - Brian Coney, The Thin Air bit.ly/2L91J73


"Malediction Boulevard, is an electrocution of thought and unwieldy emotional grit, stitched with dark, arsenic synths and an acidic aroma.

With the title cut, the mysterious man in black leather gloves scrapes the human skull clean in order for us to truly confront similar notions of beauty and ruin." - Jason Scott, B-Sides and Badlands bit.ly/2VK3sDW


"It has that perfect synthy buildup – that unresolved tension – that makes it oh so spooky. Then when you hear the guitar shred – pure heaven.

But it’s not just the leads that make this song great. Hearing that perfect bass groove – with laser like focus – is exactly what makes this track, an A-list track. Then when the tom fills kick in, you know you’re in for a treat." - Recclective bit.ly/2KVwHzp

Far out, exotic music comin' out of Belfast, Northern Ireland

Featured on BBC Radio 1, New Retrowave and the stereos of many excellent people

Bandcamp Daily  your guide to the world of Bandcamp

Featuring appearances from Kari Faux, Bluestaeb and and interview with NY-bred artist Wiki